is a set of audio and digital stories highlighting the experiences of people whose lives have changed dramatically during the pandemic.

Indigenous Midwifery is a non-narrated audio story that sheds light on issues of reproductive justice for other midwives, people that make healthcare legislation and northern native americans who may not be aware of the struggles that undocumented indigenous farm workers face with their reproductive health.  Unlike the recent wave of coverage focusing on reproductive health care for Northern Native communities, our project focuses on an Indignous farmworkers from south of the border who are undocumented.

Dignity, Ceremony & Healing: How One Indigenous Midwife Supports Farmworkers During The Pandemic

Tucked away in the Santa Cruz mountains, Maria Ramos Bracamontes lives in a cabin with her partner and their children. Maria is the first Mexican-indigenous midwife in Watsonville, a farming community located in Santa Cruz County.

Maria came from Jalisco, Mexico to Santa Cruz, California with her parents when she was just five-years-old. Most of her entire extended family was born at home, but just a few years later, her mother had trouble with her twelvth pregnancy.

“The last time she gave birth, it was not a vaginal birth.” said Maria. “She had a complication, and she ended up dying in childbirth.” Maria didn’t realize until later on in her life what her mother’s death would mean to her and her journey of becoming a midwife. At the same time, midwives run deep in Maria’s family, with her great-grandmother and grandmother both doing birth work.

Listen to this story 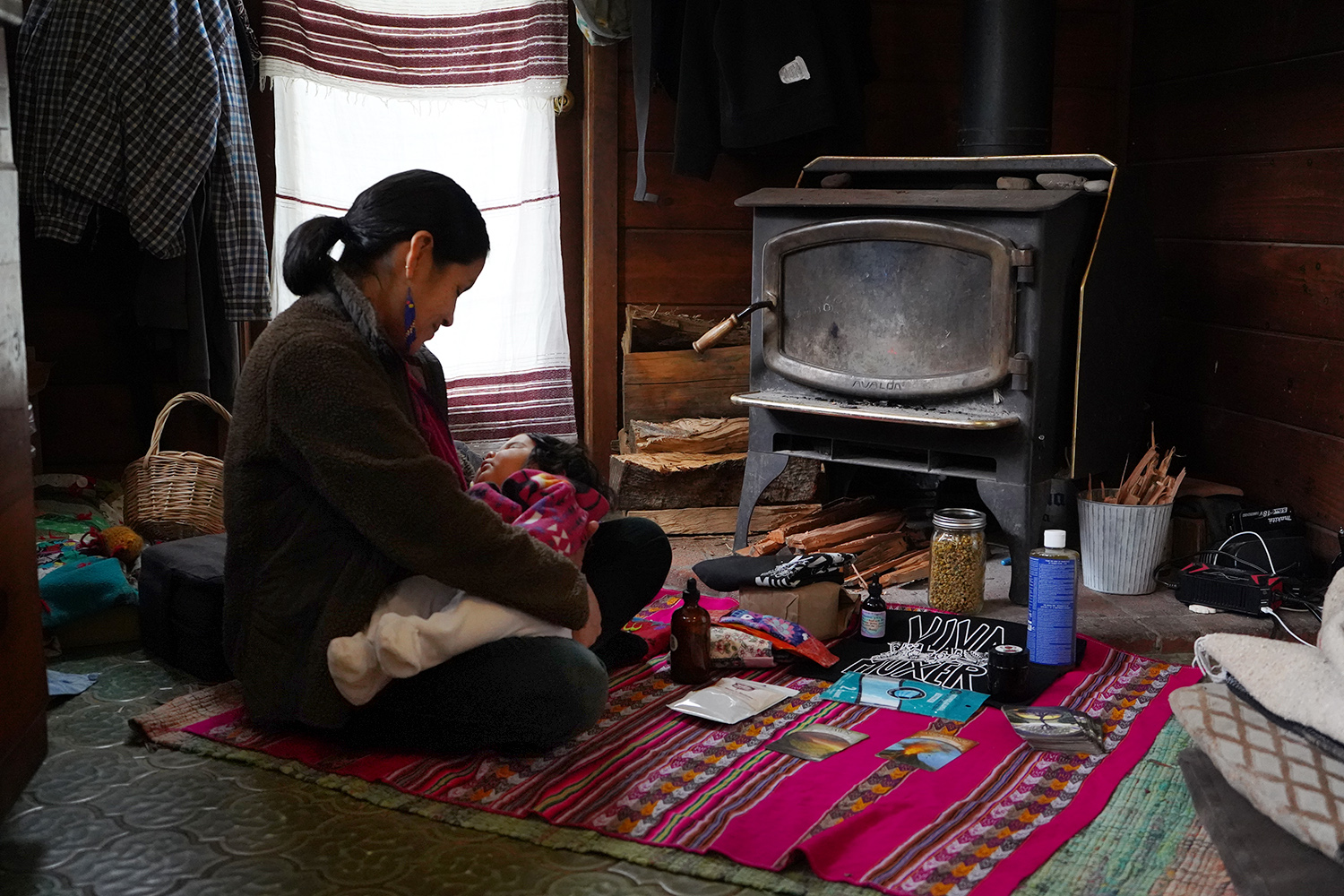 Maria Ramos Bracamontes, her partner and their children live off-the-grid in the Santa Cruz mountains. Their home is heated up by a wood-burning stove in the kitchen. (Photo by Adreanna Rodriguez)

When Maria first got into birth work, she dedicated her time to working with people suffering from substance abuse and trauma. She saw her nephew removed by Child Protective Services at birth, and felt disturbed by the way her sister was treated in the process.

“She had a really bad experience at the hospital with everyone, the nurses, the social workers, the medical providers were so judgmental,” Maria said. She says that she sees birth as a ceremony, not as a medical emergency.

“And that experience really led me to realize that I needed to be there for my community, that I could not afford to be attending you know, the births of privileged people who had the privilege to do out of hospital births,” she said. This experience also led Maria to start a doula program for women in recovery, which also teaches them how to navigate child protective services. Maria had been working in recovery up until a year ago.

Growing up in Santa Cruz, Maria was surrounded by farm working communities. Her family also worked in the fields and at one point was undocumented.

“The physical trauma of growing up illegal, feeling invisible, and being, you know, ignored and not having access to basic needs is just incredibly traumatic,” she says. Maria is now documented, but she says it has taken her whole life to heal and to feel like she belongs. Now as a midwife working in the hospital, her work prioritizes undocumented people, specifically Indigenous women. She works at Salud Para La Gente, a federally qualified health care center offering services to farmworkers living and working in California’s Central Coast.

A large majority of the farmworkers she sees in the clinic are Mixteca, who are often unable to afford out-of-hospital births. Again Maria found herself uncomfortable with what she was seeing.

“…the level of disrespect and mistreatment in the hospital is just horrific,” she said. So she wants to be in the hospital for them, giving them the best sacred care possible. For Maria, it is important that she is able to meet them wherever she is needed, doing everything in her power to provide a ceremonial space wherever they are.

At the same time while working in the clinic, Maria noticed that a lot of her patients come in with reproductive health needs that have been complicated by their work in fields, such as cramps, irregular cycles, and heavy bleeding. Seeing the farm workers in the clinic deprived of basic needs, Maria knew that she wanted to do something to provide them with menstrual care products and also traditional remedies, but she wasn’t sure of how to go about doing that.

Last spring during the pandemic, Maria had just started attending births at the hospital when she discovered she was pregnant. However, because there were uncertainties about the virus, she stopped attending births.

Once stimulus checks started going out, Maria observed that undocumented farm workers were still having to show up to work and were not getting any help from the government.

“I just felt so awful about the fact that only the privileged people we’re going to get it, not the people that really needed them,”she said.

The lack of traditional care offered for her own pregnancy combined with the discrepancy between who did and did not receive assistance inspired Maria to take action.

“When I found myself pregnant during the pandemic, myself being deprived of the traditional care, that I was so excited to receive, that’s when I decided to start making medicines for Campesinas,” Maria said.

In May of last year, Maria used her entire stimulus check to start the Campesinx Womb Care Project. The project provides care packages consisting of a variety of supplies, like pads, tampons, masks, herbal teas for general non-pregnant womb care.

“We prefer pads with no chemicals that are environmentally friendly,” Maria said. “There’s an organization called Days for Girls and they provide menstrual pads for women all over the world. And we were able to get 50 kits.” Maria hopes to get more pads soon from this organization.

There are also care packages specifically for pregnancy and postpartum support that include baby wipes and a belly band. All packages come with a $20 bill and written affirmations. To date, the project has distributed over 600 womb care kits. Her program also provides rent assistance.

Maria has just started attending births again at the clinic. Although it feels conflicting at times, she says she knows that is where she needs to be right now.

“I am committed to the people more than to the place,” she said. “And it’s been such an honor.”

Maria’s goal is to create a birth center for the farmworkers, where they can go to give birth and be treated with sacredness, dignity and respect.

Because of her age, Maria herself was terrified about giving birth last fall, despite the fact that she was healthy. She realized that she was turning 40, which was the same age that her mother was when she died during childbirth.

“My physical being was still terrified, and in one way, I thought maybe I was going to die in birth like my mom did,” Maria said. She gave birth to a healthy baby at home with her partner, in a pool of water, surrounded by fresh fruit, traditional medicines, and tea. Her daughter’s middle name is Hermelinda, in honor of her mother.

“I just knew it was her, and that my daughter is here to continue helping me heal and to mother me.” 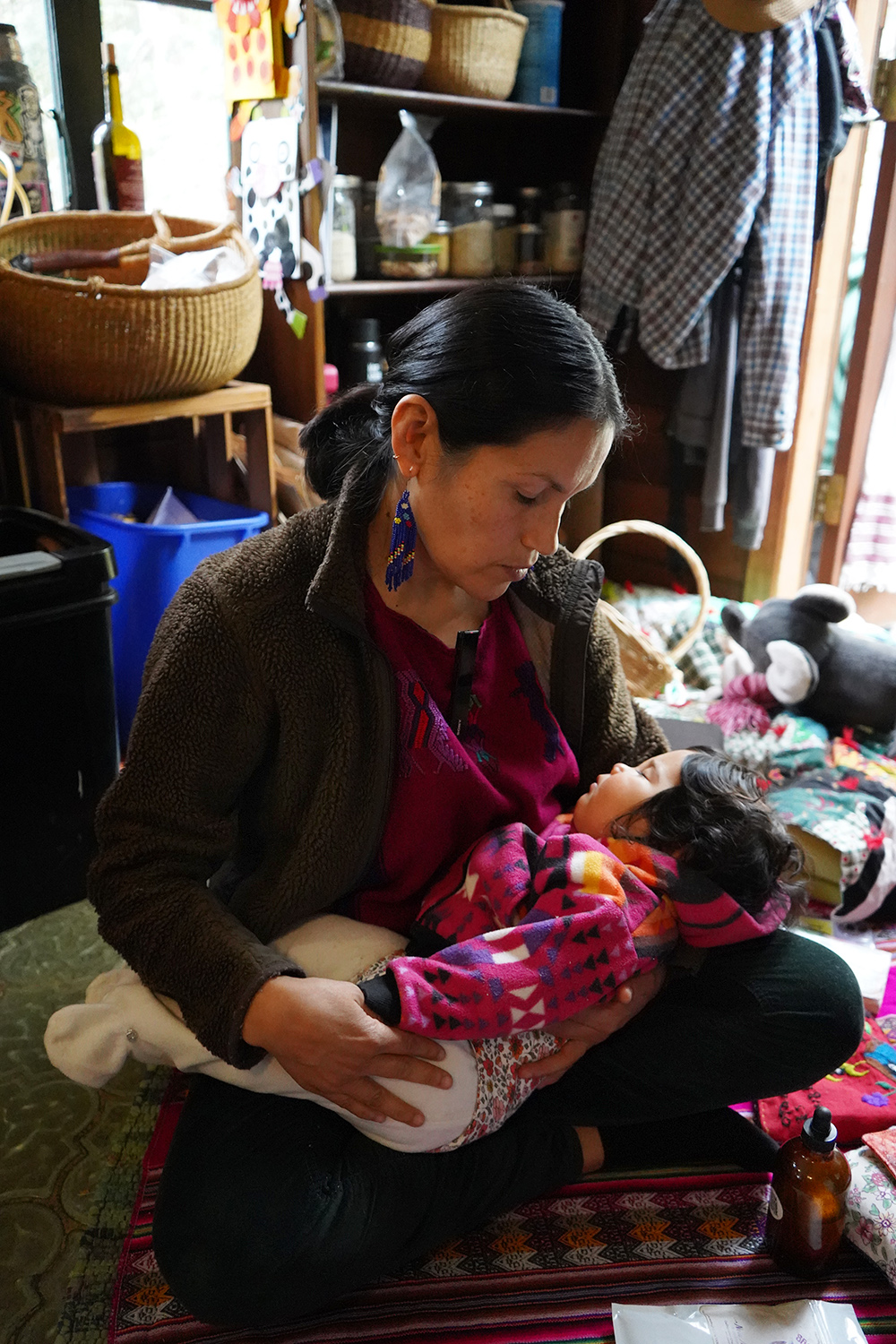 Midwife Maria Ramos Bracamotes cradles her baby at her home that is nestled away in the Santa Cruz mountains. (Photo by Adreanna Rodriguez)

The Next Generation Radio Project is a week-long digital journalism training project designed to give competitively selected participants, who are interested in radio and journalism, the skills and opportunity to report and produce their own multimedia story. Those chosen for the project are paired with a professional journalist who serves as their mentor.

This edition of the #NPRNextGenRadio project was produced in collaboration with the Native American Journalists Association in March 2021.

NPR’s Next Generation Radio program is directed by its founder, Doug Mitchell.